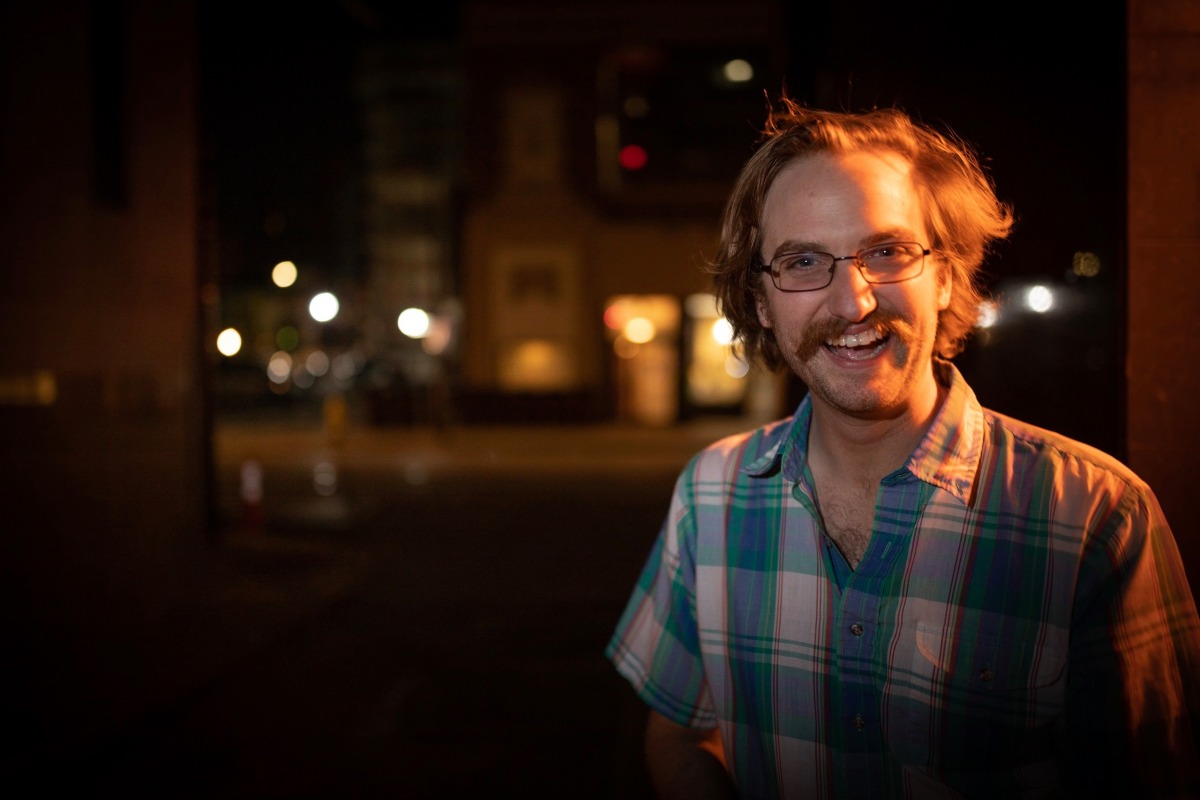 Dan Alten is a hip-shaking comedian from Louisville, who will be headlining shows tonight (Friday, July 30) and Saturday at Planet of the Tapes .

He will be joined at Planet of the Tapes by host June Dempsey and comics Steven Wilber and Kate Murphy.

Tickets are $10 online or at the door. Get $5 off with the promo code “DOG.” Tickets are available here.

Dan took the time to answer 5 Questions from Louisville Laughs.

Louisville Laughs: How would you describe your comedy?

Dan Alten: Intelligently absurd. I’m a big goofy charming idiot who is smart and clever and quirky with hips that just won’t quit. Old folks say, “He’s the only dirty comic I like.” And young folks think I’m Mister Rogers. I don’t know how to describe what I do, but folks seem to think I know how to do it.

Who have been your biggest influences?

My trinity would have to be God, Jesus and the Holy Spirit. But if I were to do that with comedians who influenced me, I would say Steve Martin, Stewart Lee, and Norm Macdonald. I was watching a lot of Community, Taxi and 30 Rock in a manic state when I decided to pursue comedy, so maybe blame them too.

You do a lot of comedy on the road. What are the keys to a successful road trip?

I play a lot of old run down and forgotten towns that I only know about from Waylon Jennings lyrics, which is great because the history hasn’t been bulldozed over yet and replaced with a Blaze Pizza. In “nicer” cities they often build over their history before they realize it was important, but you go down to Mississippi and you can still see the same barbershop from the early 1900’s photographs. It’s all rust covered and abandoned. Plus a very mangy dog keeps chasing you because you made the mistake of tossing it half of your apple.

So my advice is to get plenty of water, pop in the Grand Funk Railroad and just go drive around looking for brown signs pointing to some guy’s old mill. Also never wear the shirt you were gonna wear onstage during the day, who knows what kinda slop you’ll be getting slipped up in during the day.

When I was about 9 months into stand up I had to follow a guy at an open mic who tried to throw his recently deceased father’s ashes into the crowd. I’ve been onstage in Des Moines, Iowa, while a 3-legged dog dropped a deuce about a foot from my flip flops. A guy in Cookeville, Tenn., once tried to fight me onstage because the bartender stopped flirting with him to watch me (he was staying in the hotel room next to mine too).

I did an outdoor show in Rock Island, Illinois, last month at 9 pm on July 4th in the middle of peak firework displays. And the previous night in Peoria you could hear the nearby demolition derby race from the stage. All of those shows were great. I love doing comedy.

What’s the weirdest show you did that turned out fun?

I used to run a show where we’d bring headliners from HBO and Comedy Central and have them perform in my friend’s damp and mysterious basement for about 40-50 strange Kentucky hipsters, so I know not to judge a book by its cover. Music is something we enjoy in a variety of time and settings and yet so often comedy is kept exclusively in the corners of dark bars [Planet of the Tapes has very comfortable and lovely lighting].

I love playing unique venues and going to small towns that don’t normally have comedy and turning a record store or lizard hatchery or a condemned house into a magical place full of laughter. I’ve had great sets next to a campfire in the woods of Alabama, I’ve done a guerrilla show at the City Museum in St. Louis, and I’ve even given folks the goods on the sidewalks of Bardstown Rd. Both the cops and the homeless guy they were harassing enjoyed the show!

And look for his Funny Dinner podcast he co-hosts with Eric Sorgel (available everywhere). It’s not a conversation between friends, it’s two people making you laugh.